Eviction is a traumatic experience in which families are forced from their homes for not paying the rent or mortgage.

We want to know: As children transition into adulthood, does eviction cause negative outcomes?

When children were about 15 years old, each child’s primary caregiver was asked the following question: 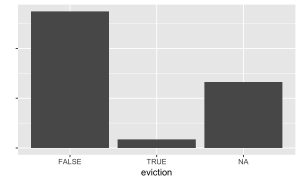 In the New York Times bestseller Evicted: Poverty and Profit in the American City, Harvard sociologist and MacArthur “Genius” award winner Matthew Desmond describes fieldwork in which he spent several years living alongside tenants being evicted in low-income Milwaukee neighborhoods. Desmond helped tenants move their things into trucks, followed landlords into eviction court, and watched as children moved from school to school while their families searched for housing. Eviction literally uproots families from their homes, and it is most prevalent among the most disadvantaged urban families. Given Desmond’s qualitative account, it is plausible that eviction may have substantial negative effects on child outcomes in early adulthood.

Emerging evidence further suggests that eviction is sufficiently prevalent to warrant policy attention. Researchers at the Federal Reserve Bank of Atlanta have examined administrative records to find that 12.2 percent of rental households were evicted and forcibly displaced in 2015 in Fulton County, GA (Raymond et al. 2016). Likewise, the Milwaukee Area Renters Study found that 13 percent of private renters experienced a forced move during the 2 years referenced in a survey questionnaire (Desmond and Schollenberger 2015). If eviction creates disadvantage for children, it is sufficiently prevalent to have wide-reaching impacts.

However, untangling cause from selection is no simple task (see our blog post on causal inference and this interview with Matthew Desmond on the topic). It is easy to show that children who experience an eviction have worse outcomes later in life; it is hard to show that these outcomes are not caused by other factors that are correlated with eviction. In a quantitative study using propensity score matching methods on earlier waves of the Fragile Families and Child Wellbeing Study, Desmond and Kimbro (2015) find that eviction is associated with negative outcomes, net of obvious sources of selection bias.

We applaud the work of all the individual research teams that have placed eviction on the table as a scientific concept of interest. However, any individual research team can only adjust for a selected group of observed covariates, and results can be sensitive to the set chosen. We ask you to contribute a model for the probability that a child experiences an eviction between the age 9 and age 15 interviews of the Fragile Families and Child Wellbeing Study, given any set of the birth to age 9 characteristics you choose to include, and any statistical model you choose to employ. Together, we will produce a collaborative propensity score model that the entire scientific community can agree upon, which is not sensitive to researcher decisions. We will then interview a subset of children who are matched on the propensity score, to assess the plausibility of the conditional ignorability assumption required for causal inference (see our blog post on causal inference). If the interview suggest that causal inference may be warranted, we will use these collaborative propensity scores to estimate the causal effect of eviction on child outcomes to be measured several years from now, when children are approximately 22 years old.

In summary, this research agenda will produce estimates of the effect of adolescent eviction on attainment during the transition to adulthood. These collaborative estimates will be robust to the decisions of individual researchers. The assumptions needed for causal inference will be validated in qualitative interviews. These steps will maximize the validity of causal inference in the absence of a randomized experiment.

To achieve these goals, we need your help. Apply to participate, build a model, and upload your contribution!