Getting scores on holdout data

As described in an earlier blog post, there will be a special issue of Socius devoted to the Fragile Families Challenge. We think that the articles in this special issue would benefit from reporting their scores on both the leaderboard data and the holdout data. However, we don’t want to release the holdout data on August 1 because that could lead to non-transparent reporting of results. Therefore, beginning on August 1, we will do a controlled release of the scores on the holdout data. Here’s how it will work:

We realize that this procedure is a bit cumbersome, but we think that this extra step is worthwhile in order to ensure the most transparent reporting possible of results.

Submit your request for scores here.

We are happy to announce that there will be a Fragile Families Challenge event Sunday, August 13 at 2pm at the American Sociological Association Annual Meeting in Montreal. We will gather at the Fragile Families and Child Wellbeing Study table in the Exhibit Hall (220c). We are the booth in the back right (booth 925). This will be a great chance to meet other participants, share experiences, and learn more about the next stages of the mass collaboration and the Fragile Families study more generally. See you in Montreal!

A Data Pipeline for the Fragile Families Challenge

In this post, we discuss the challenges of preparing the Fragile Families data for modeling, as well as the rationales for the methods we chose to address them. Our code is open source, and we hope other Challenge participants find it a helpful starting point.

If you want to dive straight into the code, start with the vignette here.

A critical step is to identify different variables types, or levels of measurement. This matters because most statistical modeling software transforms categorical covariates into a series of k – 1 binary variables, while leaving continuous variables untransformed. Because categorical variables are stored as integers, with associated strings as labels, a researcher could just use those integers directly in a model instead—but there is no guarantee that they would be substantively meaningful. For interpretation, and potentially for predictive performance, accounting for variable type is important.

This seems like a straightforward problem. After all, it is typically clear whether a given variable is categorical or continuous from the description in the codebook. With a handful of variables, classifying them manually is a trivial task, but this is impossible with over 12,000 variables. An automated solution that works well for the majority of variables is to leverage properties of the Stata labels, using haven, to convert each variable into the appropriate R class—factor for categorical variables, numeric for continuous. We previously released the results of this work as metadata, and here we put it to use.

A second problem similarly arises from the large number of variables in the Fragile Families data.  While some machine learning models can deal with many more parameters than observations (p >> n), or with high amounts of collinearity among covariates, most imputation and modeling methods run faster and more successfully with fewer covariates. Particularly when demonstrating or experimenting with different modeling approaches, it’s best to start out with a smaller set of variables. If the constructed variables represent expert researchers’ best attempts to summarize, consolidate, and standardize survey responses across waves, then those variables make a logical starting point. Fortunately, most of these variables can be identified with a simple regular expression.

Data may be missing in a (panel) study for many reasons, including respondent’s unwillingness to answer a question, a don’t know response, skip logic (for questions that do not apply to a given respondent), and panel attrition (for example, due to locating difficulties for families). Additional missing data might be due to data entry errors and—particularly relevant for the challenge—anonymization to protect sensitive information of members of a particularly vulnerable population.

What makes missing data such a challenge for computational approaches? Many statistical algorithms operate on complete data, often obtained through listwise deletion of cases. This effectively assumes that instances are missing completely at random. The Fragile Families data are not missing completely at random; moreover, the sheer amount of missingness would leave few cases remaining after listwise deletion. We would expect a naive approach to missingness to significantly reduce the predictive power of any statistical model.

Therefore, a better approach is to impute the missing data, that is, make a reasonable guess about what the missing values could have been. However, current approaches to data imputation have some limitations in the context of the Fragile Families data: 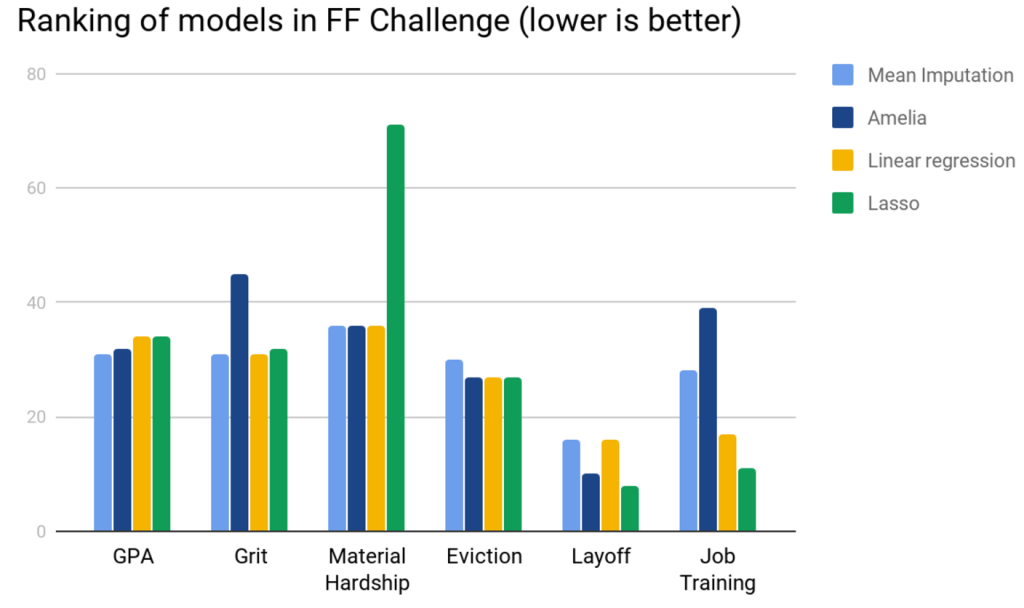 The approach we used comes with a number of assumptions:

We modularized our work into two separate repositories, following the division of labor described above.

For missing data imputation, FFCRegressionImputation, which

For a technical overview of how these two bodies of code integrate with each other, check out the integration vignette. The vignette is an RMarkdown file which can be run as-is or freely modified.

The code in the vignette subsets to constructed variables, identifies those variables as either categorical or continuous, and then only imputes missing values for the continuous variables, using regression-based imputation. We chose to restrict the variables imputed for illustrative purposes, and to improve the runtime of the vignette. Users of the code can and should employ some sort of imputation strategy—regression-based or otherwise—for the categorical variables before incorporating the covariates into a predictive model.

What seemed at the beginning to be a straightforward precursor to building predictive models turned out to have complexities and challenges of its own!

From our collaboration with others, it emerged that researchers from different fields perceive data problems very differently. A problem that might not seem important to a machine-learning researcher might strike a survey methodologist as critical to address. This kind of cross-disciplinary communication about expectations and challenges was productive and eye-opening.

In addition, the three of us came into this project with very different skillsets. We settled on R as a lingua franca, but drew on a much broader set of tools and techniques to tackle the problems posed by the Fragile Families Challenge. We would encourage researchers to explore all the programming tools at their disposal, from Stata to Python and beyond.

Finally, linking everyone’s efforts together into a single working pipeline that can be run end-to-end was a significant step by itself. Even with close communication, it took a great deal of creativity as well as clarity about desired inputs and outputs.

We hope that other participants in the Fragile Families Challenge find our tools and recommendations useful. We look forward to seeing how you can build on them!

Helpful idea: Compare to the baseline

Participants often ask us if their scores on the leaderboard are “good”. One way to answer that question is with a comparison to the baseline model.

In the course of discussing how a very simple model could beat a more complex model, this post will also discuss the concept of overfitting to the training data and how this could harm predictive performance.

What is the baseline model?

We have introduced a baseline model to the leaderboard, with the username “baseline.” Our baseline prediction file simply takes the mean of each outcome in the training data, and predicts that mean value for all observations. We provided this file as “prediction.csv” in the original data folder sent to all participants.

How is the baseline model performing?

In all cases except for material hardship, the baseline model is in the top half of scores!

A quick way to evaluate the performance of your model is to see the extent to which it improves over the baseline score.

How can the baseline do so well?

As the complexity of a model increases, the model becomes more able to fit the idiosyncracies of the training data. If these idiosyncracies represent something true about the world, then the more complex fit might also create better predictions in the test data. 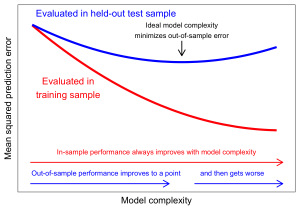 Note: Figure inspired by Figure 7.1 in The Elements of Statistical Learning by Hastie, Tibshirani, and Freedman, which provides a more thorough overview of the problem of overfitting and the bias-variance tradeoff.

How can this be? A classical result in statistics shows that the mean squared prediction error can be decomposed into the bias squared plus the variance. Thus, even if additional predictors reduce the bias in predictions, they can harm predictive performance if they substantially increase the variance of predictions by incorporating random noise.

What can be done?

We have been surprised at how a seemingly small number of variables can yield problems of overfitting in the Fragile Families Challenge. A few ways to combat this problem are:

But at minimum, compare yourself to the baseline to make sure you are doing better than a naive prediction of the mean!

We are happy to announce that Challenge participant Connor Gilroy, a Ph.D. student in Sociology at the University of Washington, has created a new resource that should make working the Challenge data more efficient. More specifically, he created a csv file that identifies each variable in the Challenge data file as either categorical, continuous, or unknown. Connor has also open sourced the code that he used to create the csv file. We’ve had many requests for such a file, and Connor is happy to share his work with everyone! If you want to check and improve Connor’s work, please consult the official Fragile Families and Child Wellbeing Study documentation.

Connor’s resource is part of a tradition during the Challenge whereby people have open sourced resources to make the Challenge easier for others. Other resources include:

If you have something that you’d like to open source, please let us know.

Finally, Connor work was part of a larger team project at the Summer Institute in Computational Social Science to build a full data processing pipeline for the Fragile Families Challenge. Stay tuned for that blog post on Tuesday, July 18!