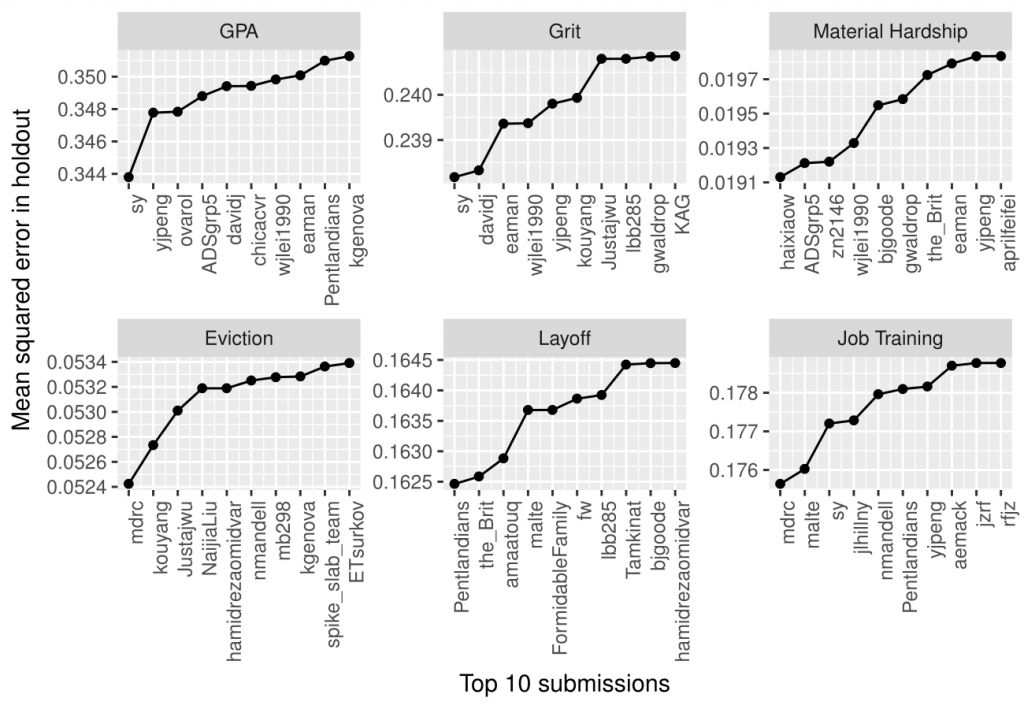 The Fragile Families Challenge received over 3,000 submissions from more 150 teams between the pilot launch on March 3, 2017, and the close on August 1, 2017. Each team’s final submission score on the holdout set is provided at this link. In this blog post, we are excited to announce the prize winners!

We are awarding prizes to the top-scoring submissions for each outcome, as measured by mean-squared error. The winners are:

As promised, we are also awarding progress prizes to the top-scoring submissions for each outcome among submissions made by May 10, 2017 at 2pm Eastern Time. The following teams had the best submission as of this deadline are:

Greg Gunderson (ggunderson) produced machine-readable metadata that turned out to be very helpful for many participants. You can read more about the machine-readable metadata in our blog post on the topic. In addition to being useful to participants, this contribution was also inspirational for the Fragile Families team. They saw what Greg did and wanted to build on it. A team of about 8 people is now working to standardize aspects of the dataset and make more metadata available. Because Greg provided a useful tool for other participants, open-sourced all aspects of the tool, and inspired important changes that will make the larger Fragile Families project better, we are awarding him the foundational award.

The Board of Advisers of the Fragile Families Challenge would also like to recognize several teams for particularly innovative contributions to the Challenge. For these prizes, we only considered teams that were not already recognized for one of the awards above. Originally, we planned to offer two prizes: “most novel approach using ideas from social science” and “most novel approach using ideas from data science.” Unfortunately, this proved very hard to judge because many of the best submissions combined data science and social science.

Therefore, after much deliberation and debate, we have decided to award two prizes to for innovation. These submissions each involved teams of people working collaboratively. Each team thought carefully about the raw data and cleaned variables manually to provide useful inputs to the algorithm, much as a social scientist typically would. Each team then implemented well-developed machine learning approaches to yield predictive models.

We are recognizing the following teams:

We are encouraging these teams to prepare blog posts and manuscripts to explain their approaches more fully. To be clear, however, there were many, many innovative submissions, and we think that a lot of creative ideas were embedded in code and hard to extract from the short narrative explanations. We hope that all of you will get to read about these contributions and more in the special issue of Socius.

As explained in our correction blog post, our Board of Advisors decided to accept a submission that arrived shortly after the deadline, because of confusing statements on our websites about the hour at which the Challenge closed. This team (mdrc) had the best score for two outcomes (eviction and job training) and was awarded the final prize for each of these outcomes. Because we recognize that this was an unusual situation, we are awarding special honorary prizes to the second-place teams for each of these outcomes.

Thank you again to everyone that participated. We look forward to more exciting results to come in the next steps of the Fragile Families Challenge, and we hope you will join us for the scientific workshop (register here) at Princeton University on November 16-17!

Matthew Salganik is a Professor of Sociology at Princeton University. He is also the author of Bit by Bit: Social Research in the Digital Age (http://www.bitbybitbook.com). You can learn more about his research at http://www.princeton.edu/~mjs3.