Grit is a measure of passion and perseverance. It predicts success in many domains. The causes of grit remain unknown.

We want to know: What makes some kids unexpectedly grittier than others in adolescence?

The survey questions are adapted from the grit scale proposed by Duckworth, Peterson, Matthews, and Kelly (2007).

Our measure of grit is based on the four questions above, as answered by the child at approximately age 15. These items were part of a longer battery of questions capturing a wider range of attitudes, emotions, and outlooks. Children who refused any of the four questions or didn’t know how to answer were coded as NA, as were children who did not complete the age 15 interview. For children with four valid answers, we averaged the answers and subtracted the result from 5. This created a continuous scale ranging from 1 to 4. The way we have recoded it, a high score on our variable indicates more grit. 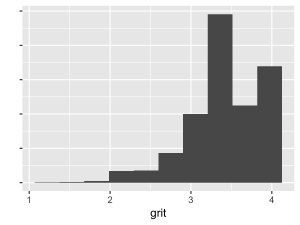 Do you keep working when the going gets tough? If so, you probably have a lot of grit.

University of Pennsylvania psychologist and MacArthur “Genius” award winner Angela Duckworth has found that grit predicts all kinds of measures of success: persistence through a military training program at West Point, advancement through the Scripps National Spelling Bee, and educational attainment, to name a few. Duckworth’s work has reached the general public through her TED talk and NY Times bestseller Grit: The Power of Passion and Perseverance.

While it is clear that grit predicts success, it is less clear what causes some people to be grittier than others. How can we help more disadvantaged children to exhibit grit?

A few researchers have begun to examine this question. In their book Coming of Age in the Other America, social scientists Stefanie DeLuca (Johns Hopkins University), Susan Clampet-Lundquist (St. Joseph’s University), and Kathryn Edin (Johns Hopkins University) argue that kids growing up in impoverished urban neighborhoods are often inspired to have grit when they develop passion for an “identity project”: a personal passion that gives them something to aspire toward beyond the challenges of the present day. This ethnographic work exemplifies how qualitative social science research may be able to uncover previously unmeasured sources of grit.

How much more could we learn if qualitative interviews were targeted at the kids best positioned to be informative about unmeasured sources of grit? By participating, you can help us build a community model for grit measured in adolescence. The combined submissions of all who participate will identify our common agreement about the amount of grit we expect to see in the Fragile Families respondents, given all of their childhood experiences from birth to age 9. By interviewing children who have much more or much less grit than we all expect, we will uncover unmeasured factors that predict grit. It is our hope that these unmeasured factors can inform future deductive evaluations and ultimately policy interventions to help kids break the cycle of poverty by developing grit.

Grit is an important predictors of success, but the causes of grit are largely unknown. Be part of the solution and help us target interviews toward those best positioned to show us these unmeasured sources of grit. Apply to participate, build a model, and upload your contribution.