Material hardship is a measure of extreme poverty.

We want to know: 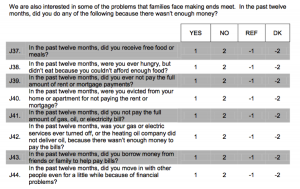 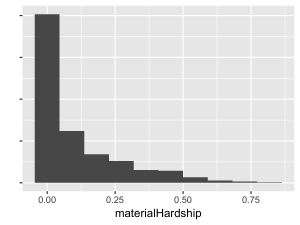 In his 1964 State of the Union Address, President Lyndon B. Johnson declared an “all-out war on human poverty and unemployment in these United States.” In the decades since, America has taken great strides toward this goal. However, severe deprivation remains a problem today. In $2 a Day: Living on Almost Nothing in America, Johns Hopkins sociologist Kathryn Edin and University of Michigan social work professor H. Luke Schaefer bring us into the lives of American families living in the nightmare of extreme poverty.

Measuring extreme poverty is hard. The material hardship scale was originally proposed in a 1989 paper by Susan Mayer and Christopher Jencks, then social scientists at Northwestern University. Rather than focusing solely on respondent’s incomes, Mayer and Jencks asked respondents about particular needs that they were unable to meet. This scale proved fruitful and captured a dimension of poverty above and beyond what was captured by income alone. With minor modifications, the material hardship scale became a standard measure in the federal Survey of Income and Program Participation (SIPP), and it has been included in several waves of the Fragile Families Study.

By participating, you help us to identify the level of material hardship that is expected at age 15 for each of the families in the Fragile Families Study. By combining all of the submissions in one collaborative model, we will produce the best guess by the scientific community of the experiences we expect for families at age 15. Undoubtedly, some families will report much more or much less material hardship than we expect. By interviewing these families, we hope to discover unmeasured but important factors that are associated with sudden dives into material hardship or unexpected recoveries.

The results of these exploratory interviews can then inform future deductive social science research and help us propose policies that could help families to escape severe deprivation. You can help us to target these interviews at the families best positioned to help. Be a part of the solution: apply to participate, build a model, and upload your contribution.